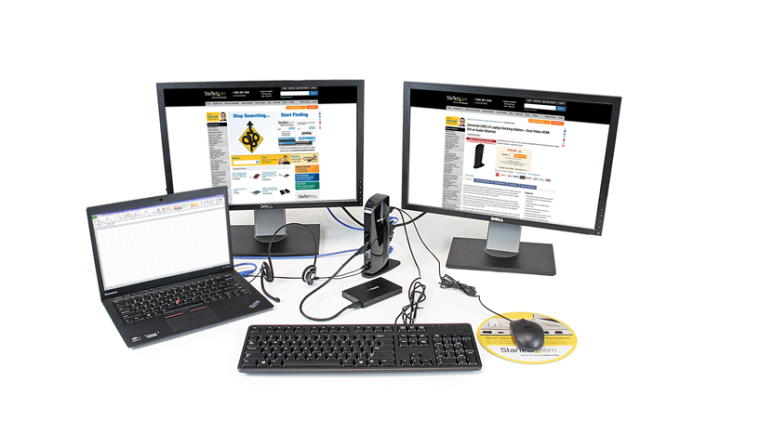 In a previous post I mentioned how I was using the StarTech USB 3 Dual Monitor Dock to run 2 displays from my Macbook Air (which is running Windows 8).

Both of my monitors are 1080p 24" screens. One is a Samsung LCD display and one is a LG LED display. Both use HDMI to connect to a source. At present there does not appear to be any dual HDMI usb 3 docks out there. They all have 1 HDMI and 1 DVI slot so I had to purchase a HDMI to DVI connector on Amazon for about £5 to make sure I could hook up both monitors to the hub.

I've been using it this dock now for over a month so I thought I'd write a quick review for anyone interested.

Before I purchased this unit I took a look at the other docks currently on offer. There is a Kensington dock and a Lenovo dock that both handle dual monitors in the market. The StarTech dock would appears to be very similar to the Kensington model (I might be wrong at which unit was released first). My guess is that they use the same manufacturer. I decided to go with the StarTech because it was just over the £100 mark which was my budget. 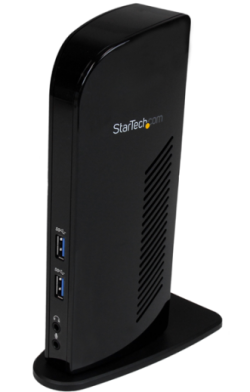 As well as having the ability to run dual monitors (which is a must for any developer in my opinion) I wanted to have more USB ports too. The Macbook Air is a great device but as a desktop replacement one area it falls short on is the lack of USB ports. Luckily the StarTech dock comes with 2 USB 3 ports in the front and 4 USB 2 ports at the back. The dock also comes with a mic and headphone connector in the front of the unit but I've never used either of these as I just plug my headphones directly into my Macbook Air.

I bought this unit from Amazon.co.uk for just over £110. As installations go it couldn't have been easier to set it up out of the box. I hooked up both monitors and then connected the dock to the laptop over USB 3. Windows picked up that a new device was connected and asked me for the driver disk. This was the first issue I had as the Macbook Air doesn't have a CD drive. Luckily the StarTech dock product page has a driver download section where I could download the required files. After a quick download I ran the install and was up and running.

For my setup I wanted to be able to use the laptop in clamshell mode (i.e. with the lid closed). I adjusted the power options in Windows 8 to allow me do this and then updated my display settings so that I extended the display from one monitor to the other. To do this in Windows 8 simply hold down the Windows key and press P and select Extend Display.

Very quickly I noticed that I had issues with the mouse cursor disappearing and being very sluggish. This happened every time I stopped moving the mouse. Every time the mouse disappeared it would take about 2 seconds to become visible again. After 2 seconds of moving the mouse the cursor could have been anywhere so this was an annoying issue. I took a look online and it seems that this is a known issue. I tried lots of the solutions in the forums that people were suggesting but in the end none of these worked for me.

My solution was to plug only 1 monitor into the dock. I decided to run the monitor with the HDMI to DVI connector off the dock (as I didn't have a dvi to display port adapter to connect to the laptop). I then connected my HDMI monitor to a HDMI to Display Port adapter that I was using previously to run one monitor from my laptop. This solved my issue with the mouse cursor which leads me to think that USB 3 and/or this dock are just not up to running 2 1080p screens at the same time. This could just be a Windows 8 driver issue and might be patched in future but it's worth noting that it is an issue right now and you may need some extra cables to run your dual monitors from your laptop with this dock.

Performance-wise I'd have to say that the display using the dock is only ok. There is definitely a noticeable lag when moving windows on this monitor. Video playback at 1080p was ok though but you won't be playing games dual screen with this device. 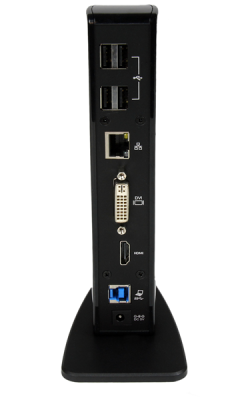 Having the extra USB ports is great, especially the 2 extra USB 3 ports on the front of the device. I find myself using these a lot for my USB 3 storage units for backing up. So far everything has worked great here.

So there you have it. I think to summarise I'd have to say that I was initially disappointed that I couldn't get the dual monitors to work over USB 3. After all this is why I bought a dual monitor hub. Using the laptop to handle one of the displays and the dock to handle the other is not a deal break for me and I was lucky enough to have a display port to HDMI connector to hand. Who knows, over the next few months StarTech might release a new version of the drivers that fixes the mouse issues I was having.

Having the extra ports is a blessing, especially on an ultrabook with only 2 USB ports. All in all I'm satisfied I bought this unit. I can now have up to 3 displays running off my laptop (2 external and the laptop screen itself) if I need it. For everyday use I stick to using the 2 external monitors but it's nice to know I could have the extra screen if I ever needed it. For day to day work, browsing, watching YouTube, etc it's a joy to use on a dual screen setup. Just don't expect to run a dual screen games on this dock and you'll be fine.