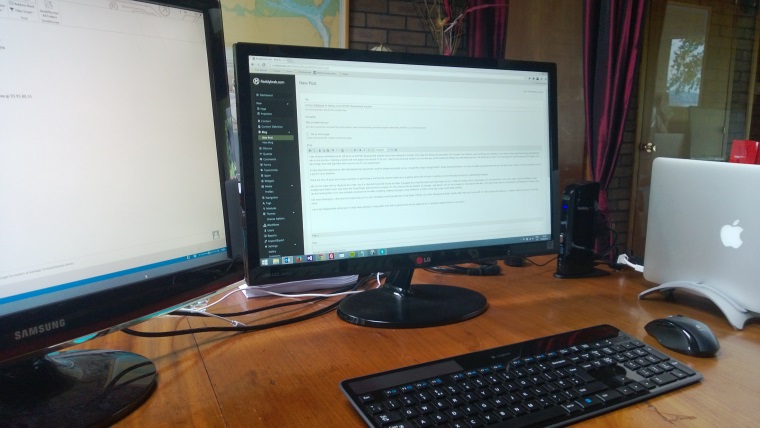 I was using an old Macbook Air (2010) as my ASP.NET web development machine since it was released in October 2010. Since the release of Visual Studio 2012 though it was feeling it's age and things were starting to slow down. Using Visual Studio along with ReSharper was a pretty bad experience on the machine. Opening projects and pages took around 10-30 secs.

I had a look around at actual Windows laptops to see what was on the market but nothing was really taking my fancy. The Macbook Air with it's SSD had spoilt me and the majority of PC laptops only had 256gb drive paired with 4gb RAM which was too low for my requirements.

In June when the Macbook Air with Intel Haswell was announced I took the plunge and picked one up. I bought the 256gb SSD/8gb RAM/i7 model. Running Windows 8 on it was easy using Bootcamp from Apple and since the latest drive releases the machine runs perfectly for me in Windows.

There are tons of posts and reviews out there on performance and how the machine stacks up as a gaming device but not much is out there on how the laptop functions as a development machine.

I run my laptop in clamshell mode (lid closed sitting on a MacBook Air Arc) and have it plugged into a StarTeck USB3 dock which helps me run 2 1080p 24" monitors and give me access to more usb ports. Visual Studio 2012 runs perfectly for me on this setup. I have the ReSharper plugin installed and while it does slow down the Visual Studio start up time for projects it's not as bad as the old machine. On average I wait about 5 secs for the computer to come back to life after I click to open a new or existing project. Once up and running there is no slow noticable slowdown for me when compiling, making new pages, using intellisense, find and replacing or other normal day to day activities in Visual Studio.

Like most developers, I don't just run Visual Studio on it's own. The laptop would typically have Visual Studio, FileZilla, SQL Server Management Studio, Spotify, MetroTwit and Chrome with 10+ tabs all open and running on 2 displays without any issues or even fan noise. Add to the fact that this is an extremely light laptop with an incredible battery life (around 8hrs in Windows Bootcamp) and you have one of the best laptops out there for web development.

I am a tad disappointed at the lack of 'ompf' when gaming (you'll defo need to lower resolutions and textures on anything serious) or doing video work but for general web dev the Macbook Air is a perfectly capable machine in my opinon.